Archive for category: Texting and Driving

You are here: Home1 / Latest News2 / Texting and Driving 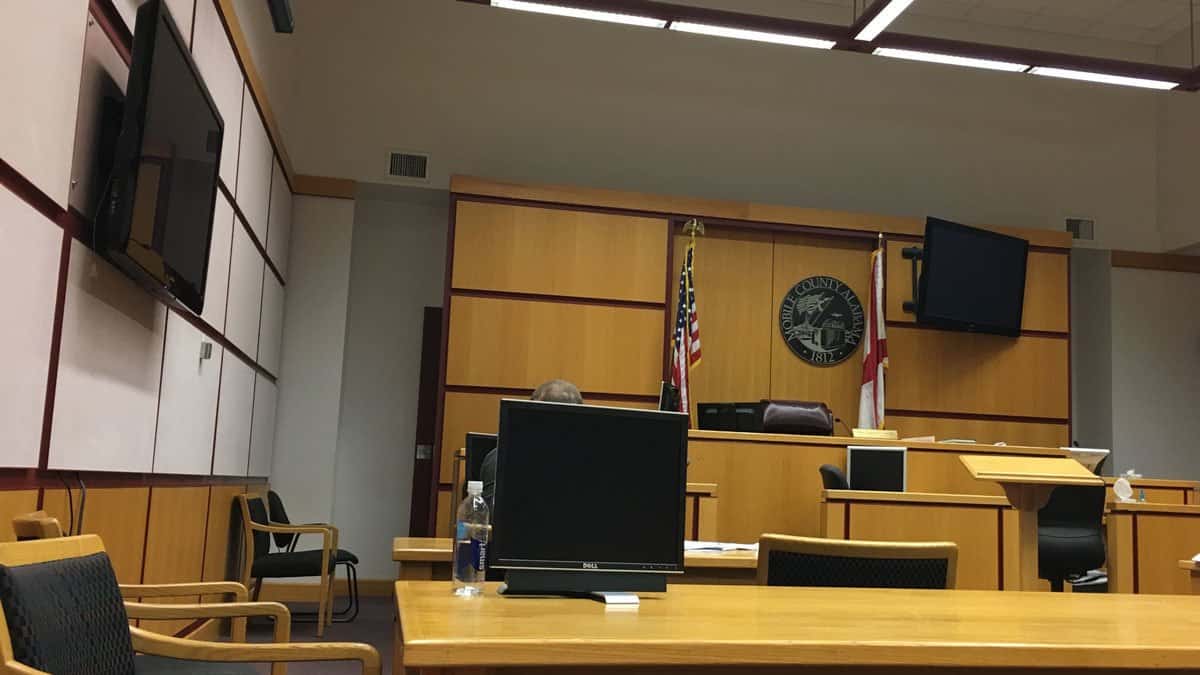 Connie Hamilton was in slow motion.

From the moment she heard the news about her 24-year-old daughter, Randi Hamilton — who had been rushed to the emergency room at University of South Alabama medical center minutes earlier — she didn’t feel like she could move at normal speeds.

“I knew she was really bad … then the emergency room doctor came in and knelt down, took my hand and I knew what he was going to say,” she said. “When that doctor told me that she didn’t make it, it just was slow motion right after that and I don’t remember when I came out of [it].”

Randi was on her way to one of her final classes as a student at the University of South Alabama when she was killed as a result of a collision caused by a Mississippi man who Mobile County District Attorney Ashley Rich said was “fixated” on his phone at the time of the crash.

The former Theodore High School cheerleader was thrown from her truck before her body hit a pine tree and landed in a driveway. Connie Hamilton was later told by witnesses that homeowners in the area formed a prayer circle around her.

“That made me feel a little bit better knowing she didn’t die alone out there,” Hamilton said. “I have a really hard time, even now, believing she’s gone. It’s just hard for me to believe and every day I just trudge on.”

Randi was just three weeks from graduation and along with her aunt had been planning a party in anticipation of the big day. In one of the toughest situations her mother had to take on, those plans had to be scrapped for a funeral.

“I was — I had family around me that helped me, that told me what to do,” she said. “Pretty much they had to tell me what to do.”

Randi’s sister, Samantha, joined their mother in wanting to do one last thing for her. Connie said they wanted to dress her “to a ‘T’” for the funeral, but when it came time for the service at Travis Road Baptist Church, they decided to close the casket.

“We just had to do that,” Hamilton said. “I think back on it now and it’s hard for me to even think about that because of seeing your child in a casket. Nobody should ever have to do that.”

“They had just started getting into that, which was really, really nice to see,” she said. “It’s really satisfying as a parent to see them finally getting along with each other and really enjoying each other’s company.”

The relationship between the three women meant a lot to Samantha as well, as detailed in her impact statement given to Circuit Judge Robert Smith at the sentencing hearing of the Mississippi man convicted of manslaughter for the crash that killed her sister last week in Mobile.

“My heart breaks due to this tragedy,” Samantha said. “For the rest of my life, we will both cry for Randi. We will cry together and we will cry separately.”

In the statement, Samantha described long, “unbearable” nights and how she has cried in bed for two years thinking of her lost sister.

Plans for the future
Like most college seniors, Randi was looking forward to graduation and had been starting to research future employment leads as a biomedical major with a marketing minor. As a vet tech for much of her early working life, Randi was hopeful she would secure a job as a pet pharmaceutical sales representative. She had found a job opening with a new company in Daphne and had filled out an application before the wreck.

“That application was found on her bedside table,” Connie Hamilton said. “She was intending on faxing it that week.”

An alumnus of USA herself, Hamilton said she knew how it felt to have a degree in her hands and wanted Randi to graduate.

“Just to have that diploma in your hand and know this is something you achieved yourself,” she said. “I really wanted her to feel that and she never did. She never got the chance.”

Randi was always the type of person looking for the next adventure, her mother said. It didn’t have to be all that exciting; in fact, it could simply be the next holiday on the calendar, but Randi was always in the mood to plan for it. She was planning for bigger life events following graduation as well.

“She was looking forward to starting a family,” Hamilton said. “She and her boyfriend had plans of getting married.”

In her impact statement, Samantha also mentioned her sadness over never being able to become a maid of honor for Randi, nor Randi returning the favor “when I make the step to become a wife.”

First-of-its-kind conviction
The driver of the truck that hit Randi’s vehicle, Jonathan Mikael Raynes, was later charged with and convicted of manslaughter as a result of the wreck — a conviction Rich called a first-of-its-type case in the state.

Raynes was sentenced on April 6 by Judge Smith to 10 years split with two years to serve in prison and two years’ probation. The other eight years were suspended, meaning if Raynes violates the terms of his probation he could serve more time.

During the hearing, Rich asked for a 10-year sentence split to serve five years, arguing Raynes had a number of recent traffic citations and had been involved in a wreck in Louisiana before the Mobile case went to trial.

Raynes’ attorney, Chase Dearman, did not return a phone call to his office this week requesting comment for this story. The case is being appealed and while the appeal process takes place, Raynes is out on a $60,000 bond.

While Rich told Smith the eyes of the community were on him as he sent a message with the sentence, Dearman argued his client’s actions merited only probation and no jail time.

“Jonathan was in a car accident … and the jury found him guilty of looking at his cell phone,” Dearman said. “I’m guilty of that…. There is absolutely no reason why probation or front-end diversion type of sentence won’t work.”

Dearman also told the judge that his client, who doesn’t speak well in public, was sorry for what happened to Randi. Several witnesses spoke on Raynes’ behalf during the hearing, including his father, a neighbor and the preacher at his church near Purvis, Mississippi.

After Smith ruled, Hamilton said she hadn’t thought much about the sentence.

“I’ve never been focused on the sentence for him,” she said. “I wanted the felony conviction that would stay with him the rest of his life because this will stay with me the rest of my life.”

While Rich said she believes this is the first conviction in the state for the relatively new texting law, it doesn’t mean district attorneys will seek the same charges under similar circumstances.

“This was an extremely egregious case,” Rich told a gaggle of reporters following the sentencing. “He uploaded pictures of himself to the phone while driving … and toggled on social media between women he wanted to meet.”

She added her office would be willing to help teach other prosecutors in the state how to successfully bring and win similar cases in the future.

A growing trend
During the hearing, Dearman brought up how common it is to see drivers texting while traveling various thoroughfares around Mobile. Rich also made mention of how common it has become, in asking Smith to make an example of Raynes. For her part, Connie Hamilton said she hopes Randi’s death can serve as a reminder to area drivers to stay off phones while driving.

“Seriously, it’s not worth it,” she said. “It’s not — nobody should have to bury their child and it’s just not worth it. You know it doesn’t matter what the phone call is, or what you’re doing with your phone. Wait until you’re not behind the wheel to do it.”

With the proliferation of smartphones and the sheer number of vehicles on the road, Hamilton said she doesn’t believe the problem will go away.

“You see young people these days and they’re so attached to their phones,” she said. “I don’t see that getting any better. I don’t see people shying away from their phone.”

In 2015 Alabama State Troopers wrote 682 citations for texting while driving, trooper spokesman Cpl. Jess Thornton said. Since the law was enacted in August 2012, more than 1,400 tickets have been written.

The law can be tricky to enforce, though, Thornton said, because it’s not illegal for a driver to be on his or her phone; the driver has to be texting.

CORRECTION: The original version of this article misidentified the judge presiding over the manslaughter case.

Via: Lagniappe written by Dale Liesch.

Testimony continued today in the trial against 23-year-old Jonathan Raynes. Raynes is charged with one count of manslaughter in the death of 24-year-old USA Student Miranda Hamilton. The prosecution says that Raynes was using social media and dating applications while driving. They say his negligence on the road caused this fatal accident.

The accident happened on April 14th, 2014 in front of the Learning Tree on Lott Road. Raynes hit Miranda Hamilton’s green F150 head-on with his white Dodge truck. Hamilton was ejected from her vehicle and later died.

The prosecution called on six witnesses to testify about what occurred before, during and after the fatal crash.

The first witness to take the stand was Charlie Winsted. Winsted and his wife Michelle both worked at the Learning Tree and were heading to work the day of the accident. Winsted testified that his wife stopped their black Honda Accord on Lott Road while waiting to make a left turn into the Learning Tree’s driveway. He says that he saw Rayne’s Dodge pick-up approaching their car from behind at a very fast speed before seeing him clip the back of their car before swerving into the other lane and hitting Hamilton head on. 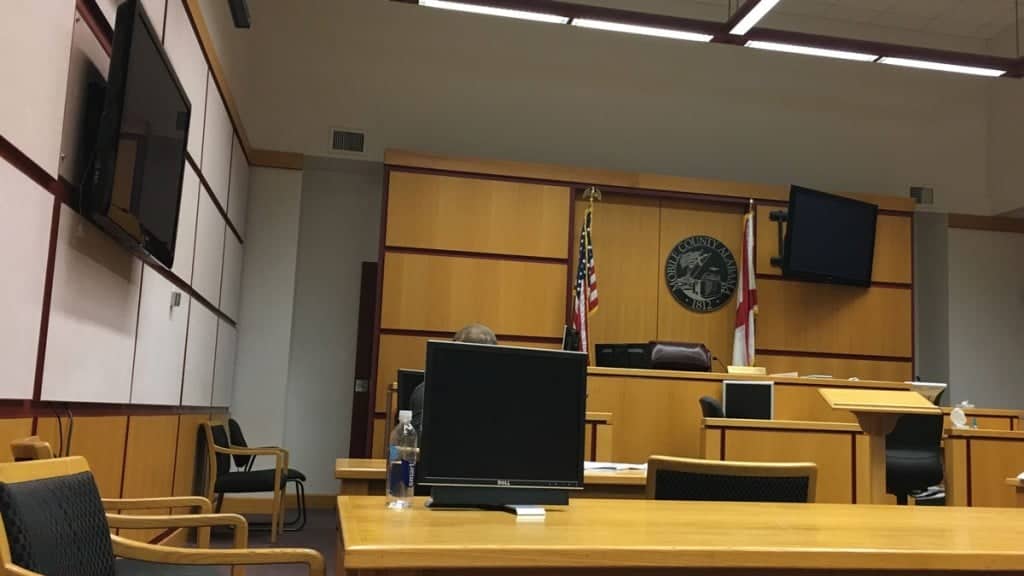 Another witness on the road at the time, Clayton Wiley said he was driving behind Raynes and witnessed the fatal accident.

Both drivers said they believe Raynes was speeding at the time of the accident.

Miranda Hamilton’s boyfriend at the time of the accident, Christopher Lowry also took the stand. He testified that he arrived on the scene after Hamilton had already been transported to USA Medical Center. He says that he walked to her flipped truck and took her purse and her phone. He says that he has those still today because it’s all he has left to hold onto.